Its Friday!! That means its time to show some more bizarre things found out on the interwebs!  Now, with today’s post – any of my readers that “like” Runners World Magazine on Facebook may already have seen this first one.  It’s the RUNBIKE! 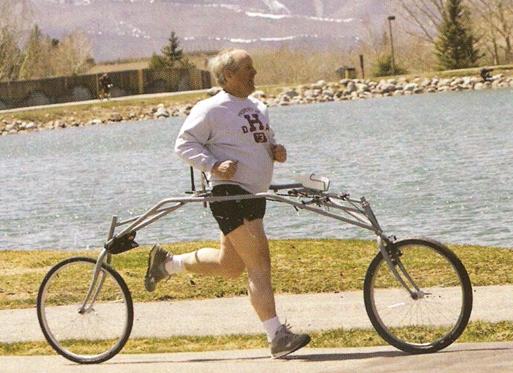 The RunBike (Picture from Runbike.com)! It allows a person to run as if they weighed 2/3 to 1/2 of their weight!

Now many of the comments on the Facebook page for Runners World were less than complimentary, and many of them I can understand.  If it is used simply for an overweight person to be able to run, with no changes to diet – then it serves no real purpose to me.  However, if you step beyond that initial impression, some new possibilities come out!

As he advertises, for people who have medical issues – making it low impact has added benefits.  But Think of this.. If a person weighed 300 pounds, they CANT run. It will destroy their joints.  But if you could remove 1/2 or 1/3 of their weight – they won’t do as much damage to their joints.  This allows them to gain the benefits of running (as far as calories burned is there a better form of exercise?) with out the damage. It could really allow someone who had hit that dreaded level (Obese) to lose the weight far more quickly than walking.   I think it’s a pretty remarkable idea..

So, For this weeks’ second interesting invention – I give you the CLUBBELL!!!!! 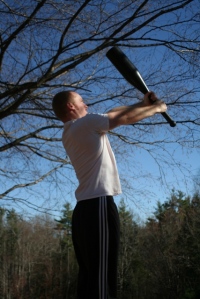 The Clubbell! Not much to add to that.. Picture from Physicalliving.com

I suppose I wouldn’t find this such a bizarre idea, if it wasn’t for the picture looking like he was trying to keep from hitting himself in the head.  Now, If that is one of the primary exercises/theories used with this I do understand where it could be a great workout. I can’t think of a single thing that inspires me to work harder than self-preservation.

I suppose that the concept isn’t any different than Kettlebells – But I haven’t encountered a picture of someone trying to keep from braining themselves with a kettlebell.   As an added bonus, think about how effective this could be as a defense weapon in a Zombie Apocalypse!

As far as my workouts are concerned – yesterday was 3 boring miles on the dreadmill. It was penance for not getting up and doing it in the morning..

This is post 84, winner will be announced in just 16 more posts!