So, I had a 6 mile run on the schedule for yesterday, and did NOT get up and do it in the morning.  After a full work day, my office headed off to a Washington Nationals game.  I was a wee bit excited, as while I am not a baseball fan (the limits to my fandom is I check and see how the Texas Rangers did on the website the next day), I had never been to a Major League Baseball game.  In fact, I hadn’t been – and my 9 and 11-year-old have enjoyed rubbing in the fact they have! (Their summer program went to a Nats game.)   When work offered the opportunity to go – I could hardly say no!

It looks like an alien has latched on to his arm..

Walking in was impressive, having only been to a minor league stadium it was bigger!  Though they had this somewhat frightening multi-arm statue that was kind of scary, right as you came in the gate.

Before the game several of us ate at the little restaurant called the “Red Porch” that was overlooking the field.  It gave us a great view of the field-preparations, as well as the players playing catch.

The Red-Shirts setting up the field!

We weren’t quite nose-bleed seats, but we were fortunate enough to have an overhang just behind us in case it rained.. And rain WAS in the forecast! The game started, with a Baritone singing the National Anthem, with a local Marine unit as the color guard.

Then the game started!  I have to admit, that even though I am not a baseball fan I enjoyed it.  It is amazing to me that people can throw a ball 100 miles an hour and faster.. It amazes me even more that someone can watch that and determine if it is a ball or a strike!   I hope those umpires have their eyesight insured!

I also have to admit, my favorite part.. After fourth inning 5 “presidents” come out and race. 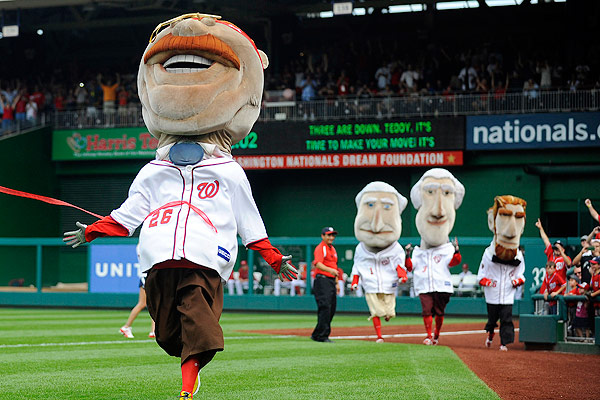 This was not from last nights game. pic from espn.com

There was a rain delay of an hour and change, which was a bit harsh on a work-night! The red-shirts came running out and covered up the field.. (Do you suppose they wear read shirts so no one is surprised when they are hit by lightning?) 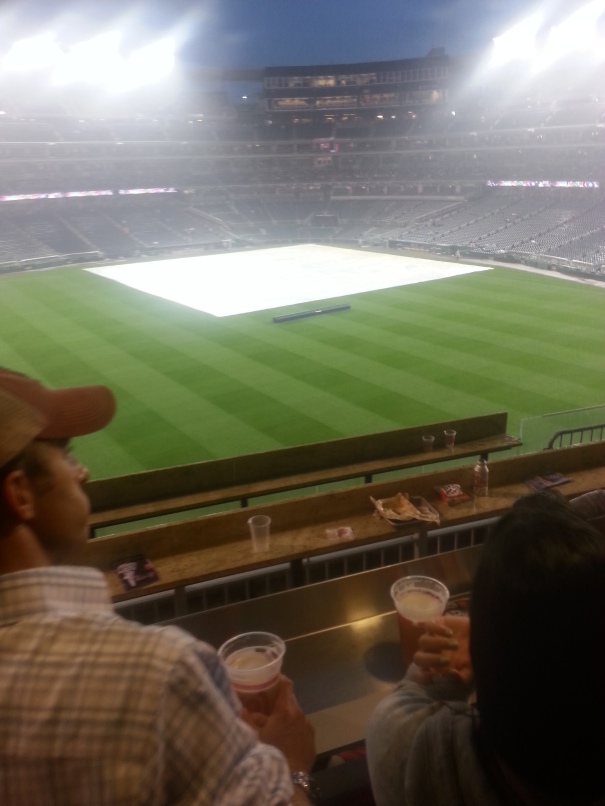 This wasn’t too bad though, as we had headed over so I could get my first major league baseball beer! 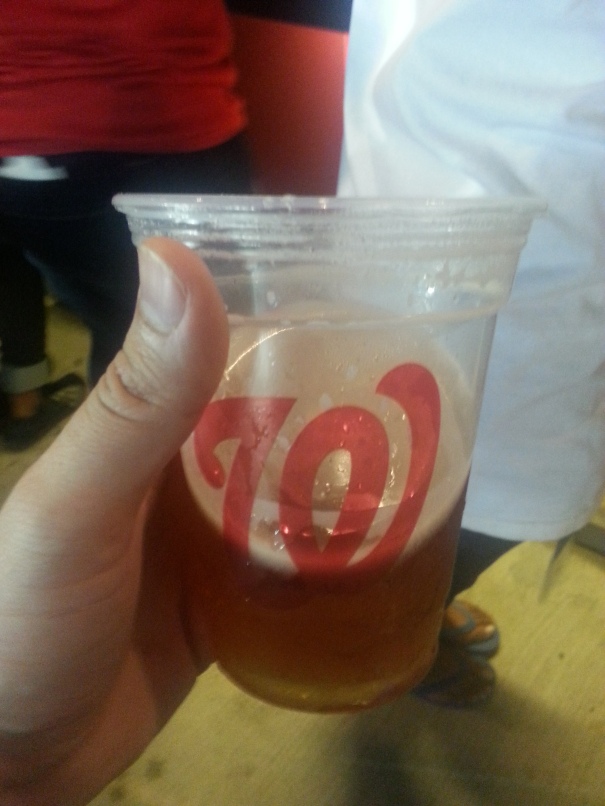 I think its great that the Washington Nationals and Wegmans share a logo.

A bunch of us headed out after the president’s race, as it was getting late. The Metro station however was QUITE entertaining. I saw the newest fashion for the ladies.. I have been kind enough to include a picture so you all know how to dress for riding the metro.

We were also fortunate enough to watch a man walk around with NY Giants flags, helmet and other paraphernalia (remember this is in Washington, not NYC) telling everyone he had to bring it, he is from NY and had to show he wasn’t going to be messed with…

And then he treated us all to a demonstration of one-armed push ups.

Washington DC is so much fun!

I did check the score, and the Nationals won.. YAY TEAM!