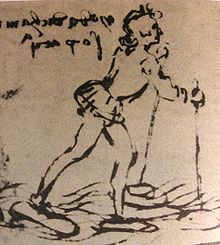 So I had some problems sleeping last night, which can often lead to some rather bizarre thoughts.  I started thinking about triathlons.  I saw over on another blogger’s site – where a comment was “I can’t swim.”  So I began to think about how a non-swimmer could do a triathlon. (it was REALLY late at night ok?  These things come to the sleep deprived mind.)  Now mind you, I have no idea what the rules are in a triathlon, but it was where my mind went.  So, what if someone could just RUN on the water?  Now, I’m not super-genius – so I was pretty sure someone else had thought of this before (Turns out Leonardo Da Vinci did – and he WAS a super genius!! See the picture above for his initial sketch)

They look pretty dry.. And they ARE surrounded by water.

Well, It also occurred to me that anything a Genius can design – some idiot has tried.  It turns out MANY idiots have tried this one.  So today’s bizarre thing found out on the interwebs – Man’s Attempt to Walk on WATER!!!! Some of the examples I found – included walking sticks (such as seen in Leonardo’s drawing above)  Which I would think would help resolve some balance issues – as well as spreading your weight out better.  The interesting thing about the number of pictures of people successfully walking on water – is in reference to Myth Busters Episode #78 from the 2007 Season.  The official quote from the Myth Buster’s Website is:

Also Very far out in the water... And dry.

Ninjas have the ability to run across water.
BUSTED
To test this myth, Adam tried various special shoe designs, including Mizu gumo, which were meant to increase the his surface area on the water or increase his buoyancy. However, the shoes either failed to keep Adam afloat or made too much noise as he tried to cross the body of water. Jamie then created a Non-Newtonian fluid from a mixture of water and corn starch, which made the water solid enough for Adam to run across unaided. However, it is unlikely that ninjas had access to large amounts of corn starch, so the myth was busted.

After mentioning it - I had to include a picture of Adam from Mythbusters right?

As far as running goes – this weekend should be fun.  I plan on doing a couple of really easy miles tonight, followed by a 12 miler tomorrow.  The  longest distance I have ever run is 11.5 miles, so this will be a new “PR” in a sense.  I’m kind of excited (and a bit worried) about it.  Then sunday?  The WARRIOR DASH!!!!!! Now I am doing this with my wife, our goal is simply to have fun so I expect we will walk/slow jog it. Especially since we are doing it on sunday (meaning many waves have run it on saturday) it is going to be solid mud.  unfortunately there will be a problem with getting pictures due to the fact that I am not about to carry my phone through the mud and water!  Hopefully the paid pictures are good – and I will post some of those here Watermarks and all!

This is post Number 89, the winner will be announced in just 11 more posts!