Home › running › Running in the Cold and Dark – and loving it.

Running in the Cold and Dark – and loving it. 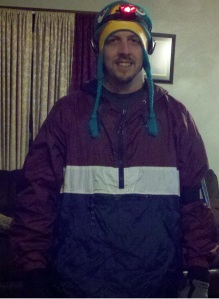 Me in my Winter running gear!

Another chilly run done and under the belt. When I started out last night at around 4:50, it was a balmy 35 degrees. I found out that once the sun goes down – the temperature drops FAST!!! By the end of the run it was quite chilly and I was glad I was finishing my run, not starting it! I had the advantage of already being warm once the temperature dropped, so even without the polar-fleece layer I was just fine!

In the new additions department of my running kit – I have added a head-lamp (the red thing on my head in the picture.) I picked up a set of flashlights on black friday that had 2 head lamps and about 5 hand-held flash lights. I didn’t spend too much time examining them when I put them in my shopping cart, but it seems that the headlamp offers a choice of red or white light. This of course was something I had to play with as I ran.

As I began my run, dusk was just starting. With this in mind, and the visibility issues that the lighting at this point brings, I kept the red light on. After leaving down-town and crossing the bridge into the south side, there was far less environmental lighting such as street lights and shop windows. What a perfect opportunity! I quickly switched my new head-lamp over to white to help with MY being able to see. As I crossed the bridge back into down town, I went back to red! Can you tell I was having way to much fun with a simple light? This had the added bonus of making me lose the last of my concerns regarding running at 5 am. I am considering taking the second head-lamp and putting it on the back, so that I have a red light to help with visibility from the rear.

The run itself was nice – Although I have found people really stare at you when you go running when there is snow on the ground. Though it might have been that they were admiring my Perry the Platypus hat. No pain in the legs (even after the run, or the next day) such as I had before. No sign of shin splints (knock on wood), calf strains or anything similar. I continued to try to keep the POSE concepts in mind, and leaned forward from the ankle, lift my legs but don’t push them down, etc.. I am not sure what specifically may be helping – so I figure I will just keep working on all of the POSE items, until I have it down. 3.33 miles down and enjoyed!

On another note, Runners World posted this incredible video that is well worth watching. Although I realize that posting it to runners is somewhat redundant – I figure we all have non-running friends that might gain something from watching it!

Tagged with: Perry the Platypus, Runners World
Posted in running

2 comments on “Running in the Cold and Dark – and loving it.”