Home › running › Running with the boy.

Running with the boy. 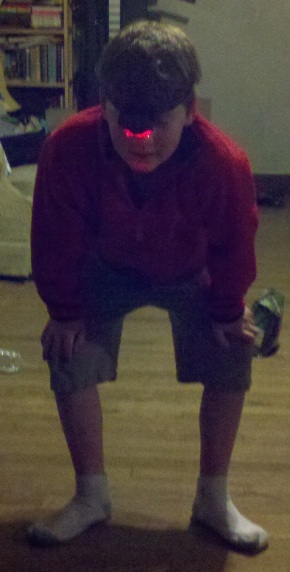 Thing 1 Showing how tired he is after the run.

Last night was Girl Scout night, so my wife and daughter went off to their bi-weekly meeting.  This was the perfect opportunity for my son to join me on that run he has been asking about.  With the 50 degree temperatures (on December 15th?) could it be any more perfect?

Considering his past-problems with side cramps,  I thought I would take a clue from the couch to 5k and try something different.  We ran for one minute, then we walked for a minute.  He did really well and the walk/run combo was perfect!  We did run into one snag about halfway into the run (at the 1.5 mile marker) he suddenly realized he hadn’t used the bathroom before we left.  I let him know he shouldn’t be hard on himself for it, as running helps to “Speed things along” in that department, and we were only couple blocks from one of my bud’s houses.  A quick visit (thanks Zak!) and back out we went.

Running was a great opportunity to talk about a lot of different things (like “Will you buy me a pair of Five Fingers so I can keep running with you Dad?) and honestly, just a great time together.  He kept asking about what I had been learning in my running-research, and then he would try out what I told him.  I suppose it is never to early to try to learn good running form!

One funny part was that (by the end) he was looking forward to the walking, claiming I was making him run for 2 or 3 minutes and only letting him walk for 10 seconds.  I felt the opposite – feeling like we walked too much and ran too little!  We had a grand time giving each other a hard time about that.  He also enjoyed the head-lamp, and switching it from Red to White as he felt it was needed.  🙂

I’ve always wanted a dog I could run with.. A boy-child might be even better!  Today’s Christmas Carol from the Parlor City Boy’s Chorus – “Walking in a Winter Wonderland”: