Home › Random › Blogger in Binghamton… And some other stuff.

What an odd week. This morning’s bizarreness started (not counting the odd dreams) with reading the morning blogs… Not unusual – except one of them actually mentioned my old home town – Binghamton, NY – and the Santa Run 5K that I would have run had I still been living there (it was totally worth missing it – to be living in a better place!) IT seems “fueledbylolz” had driven down there – Crazy! 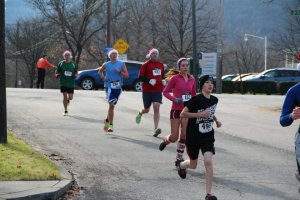 Did a total double take as I had been reading about the race on Facebook, and looking through the pictures of the race! One cool part – I was able to post a link to two pictures of her running from the Triple Cities Running Club face book page.

I expect to see my friends posting about the formerly “local” races – but not another blogger!  Awesome!  This picture was actually taken about 5 houses down from where I lived.  All she would have to do is take a quick right and she could go say “Hi” to the people who bought my house!   Small world!

So I mentioned dreams – I have to say, that you should all be thanking me and my family.  It seems that for the last couple of nights we have been successful in finding the cavern that leads to where the monsters live.  Even better than that?  We have kept them from escaping.  So tonight, when you notice you aren’t monster-chow – it is totally the doing of me and my kids.  You are welcome.

I have unfortunately (again) hit that 3 day of no running.  I really dislike going past two days, which is all that I had planned to take off.  Yesterday, I was unable to pull myself out of bed and go running on the treadmill OR outside in the 50 degree weather.  I admit it, I am such a slacker.  I have no idea how you early morning runners do it.  Though in this case, I am going to blame my poor (and recently turned 9) daughter.  at 1 am, I was up cleaning up the remnants of her Birthday Cake that apparently hadn’t sat well.  Two hours later I did fall back to sleep.  Fortunately, her mother was off yesterday so she was able to stay home and rest up – All better now! 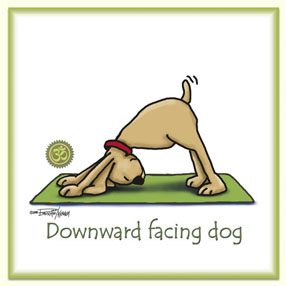 Tonight I am thinking of doing either 2 or 3 miles in the VFFs, followed by at least 20 minutes of Yoga.  (I don’t remember if I already posted about this part – but I am to lazy to go back and check.)  I ran two days last week without doing Yoga, to see if there was a noticeable difference in my Plantar Fasciitis – and there was!  My feet were definitely more-sore the next day.  What I hadn’t expected (but should have,) was that my quads/calves also had noticeably more soreness without doing my post-run stretching Yoga.

4 comments on “Blogger in Binghamton… And some other stuff.”

having fun and getting fast | Washington, DC