Its interesting the number of “Fitness” video games that are out.  Some are billed as such, and others have that “Benefit.”

Nintendo of course seemed to start it off most effectively, with the Wii Fit – but ifyou recall they actually started

the “trend” many more years ago than that.  Bandai released a game called “Family Fun Fitness – Stadium Events” in 1986 which Nintendo bought and re-released as World Class Track Meet in 1988 using the Power Pad. (for those that might have seen it in the news last year, this was the NES game that sold on Ebay for $41,000)

Interesting that one of the first games released really seemed to be ahead of its time.  Dance Dance Revolution in all of its incarnations, uses a power pad of sorts, only this time around the idea has been a huge success.

For “Fitness” video games, we have a choice of games using the Wii Balance Board for the Nintendo Wii, the Kinect  for the Xbox 360, or the Playstation Move for the PS3.  Each one has their advantages/disadvantages.. There are also some games that are released with their own specialized equipment and can consequently be purchased for any of the major console systems – such as EA Active 2.

Each of the systems have a series of games, from Zumba variants, to the base Wii Fit plus, or Kinect Sports..  The question is – do they work?

Personally, I have done the Wii Fit Plus, EA Active, EA Active 2, Wii Sports.   They all seemed to burn calories – and were definitly superior to sitting on your caboose and playing – if your looking at calories burned in a time period.  But are they a “work out?”   For me (and my chief consultant – my wife) – we had some workouts on Wii Fit/Wii Fit plus where we worked up a sweat, but there weren’t really any days that we were sore the next day from the video-game-workout we had done the day before.  BUT, it was fun.  The games were entertaining, in some cases challenging, and you didnt’ feel like you were “Exercising’.  It strikes me as a great entry-level way to start an exercise routine – very low impact, and less likely to “Dread’ doing it – due to the cute games that they have.

EA Active – did give us a work out – but on the Wii version you had to have the holster on one leg, and hold the other wiimote (obviously we had it for the Wii), so it wasn’t the most convenient..  We didn’t try this one out for long, so I can’t give alot more input.  They did have an add-on program that increased the number of workout types that were available. 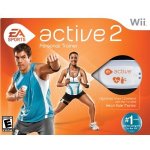 EA Sports Active 2 – This one I have done several workouts with – and I can feel it the next day.  You have NO doubt that you have had a great work out.  It is also definitly exercise, unlike the Wii Fit.  If you do the “routine” they have set up, and follow the program, it will give you a good workout plan – working out your entire body over the week.  It is effective enough (if you haven’t been doing anything but minor running at any rate), that day after the Glut/Quad work out – hills are VERY painful, and your legs know they were in a workout yesterday.  It also includes a heart rate monitor – which (For me) can encourage you to push “just a little harder” to get into the next “level” of cardio-burn..

So why am I babbling on about Video Games (fitness or otherwise) in a blog that is about running, running items, and getting ready for a marathon?  Well, Running will make your legs strong, and give you endurance.  However, upperbody still needs some more work – and core strength is never a bad thing!  So, before justifying the cost of a gym (will I go?), I am using the EA Sports Active 2 at home – as additional exercise than running.  I was definitly sweating, tired and sore yesterday while I was doing it.  Today? I could feel that I worked out yesterday – so this might be a good non-running day workout!  Plus, it is easier than just doing cardio, or watching a movie – as its more interactive.  They also vary WHAT you do, and even the day’s “theme” for the exercises.

So yet again, its a win for technology for creating tools that can make video games that don’t make us quite so flabby -as well as making actually working exercise games that burn calories, create sweat and (hopefully) help get you in better shape!