Home › running › Running in the Rain

Running in the Rain

Back in NY, I would get out of work before my wife did.  Periodically I would not only end my work day before hers, but end it reasonably near my house.  On some of these occasions, I would “Run for a Ride.’   I would see if I could get to her office, before she left work (leaving me to run home.)  It wasn’t to bad, as it was only around 3 miles.

Last night, I managed to get home a bit early.  I had previously run a google maps to see how far her new office was from my home – 3.6 miles.  Well, I was sitting on my couch looking at the clock, and I realized there were 50 minutes to go, before the end of her work day.  3.6 miles in 40 minutes? (After all, I would have to get changed and find all my running stuff!)  ABSOLUTELY!   So I quickly got  changed, grabbed my phone/armband/headphones and opened the door… It had apparently started pouring rain….

Back upstairs, find a rain jacket, phone into a ziplock baggie.  Start I Heart Radio and Runtastic, coat on – and out the door!

It was POURING!  I had forgotten how invigorating it can be to run in a down pour! 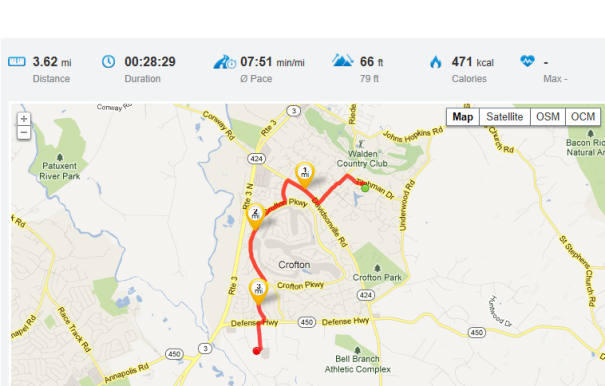 The route brought me back along Crofton Parkway, although strangely there were far less runners on a Rainy Tuesday afternoon than a sunny Sunday Morning.  I was a bit concerned that I would miss turns coming off of Crofton Parkway toward Defense Highway, but I managed it ok!  I got to her work place 10 minutes before the end of her work day!  The funny part, is she had sent me a text message while I was running, and then asked why I was ignoring her!  So, I sat on the hood of her car (in the pouring rain,) and texted her while I waited to suprise her when she came out!

I was a bit concerned that I had started off to fast when I heard my first split.  I decided I should probably slow down a bit… but didn’t.

I maintained the same pace throughout.  It may not seem like it on my last .61 miles, but I had some issues shutting off my Runtastic, with its being under my jacket.. and in my armband.. and in a ziplock…

I have to admit this was the most fun run I had in a long, long time.

Tagged with: Crofton Parkway, Rain, running, Running in the Rain
Posted in running

4 comments on “Running in the Rain”