So this morning, I thought that the best way to start Janathon – was with a 5k I found on the internet.  The Charm City Run – New Years resolution Run (Charm City Run is a chain of stores).  I headed up to Baltimore to the St. Elizabeth of Hungary church hall to get registered.  It seems that I wasn’t the only one with this idea!  It was nice that they had two helpers right at the foot of the stairs directing you where to go and gt your registration form.  Unfortunately, after that – you were left to guess.  There was one helpful person working the registration table that was sending everyone to the end of the table to pay… Unfortunately, it was only where you paid for Credit Cards! 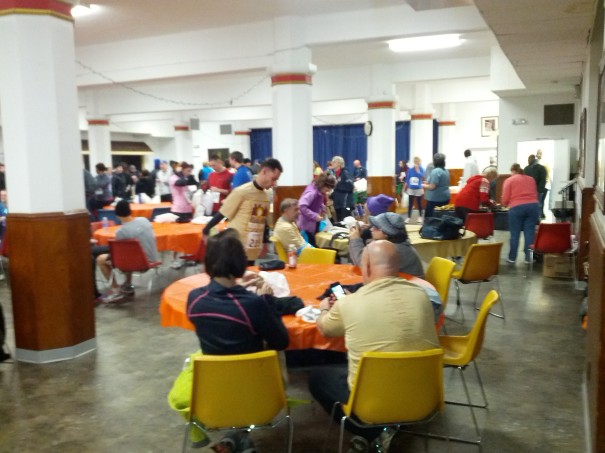 Signage would have helped.

There seemed to be plenty of room for everyone in the Hall – but maybe there were lots of warmly-dressed people outside.  I was glad I had thought to use the bathroom right after getting there – because the lines started forming after that.. The men’s didn’t get to bad – until the women took it over at 10-15 minutes of race time!  And I’m not complaining – they needed to if they were going to get to use the facilities before it started!

With 20 minutes to go, this was the first half of the women’s restroom line.

It wasn’t to bad though – found where I needed to be, then I hung out for an hour or so in the basement as it was a bit warmer there than it was outside.  Mind you, I am in no way complaining about the temperature – 47 is a GREAT temperature to run!  At 15 of start time, I headed out to the starting line.

10 minutes before start time – We started by running right toward this spot!

There were a lot of people – I can’t wait to see the total numbers.  There was even an organized running group of some sort that had formed a circle and were doing stretches/warm ups. (Holy flash backs to gym class batman!)  What was really cool was the number of families and father/son or mother/daughter combos.

Here I am waiting for the Race to start

My Goal for the run was to take it easy and enjoy it. I hadn’t run an organized 5k since the YMCA Corporate Challenge in the middle of the summer.  The course went through Patterson Park in Baltimore, which held some promise for decent scenery.  Could see that it was a loop-course, based on the fact that the 1 mile and the 3 mile signs were about 100 feet apart.    The starting line was a mess – I think that all run/walks are.  For the life of me I don’t understand why the walkers jump in near the front of the pack.  I’m apparently also spoiled – in Binghamton, it seems that all of the races are chip-timed.  This one was the old fashion gun time, with the person at the end hitting a button whenever someone crossed.  Thats fine, I’m OK with “old-fashioned” 🙂

Once the races started, it went up a nice gradual incline – and into a nice circle through the park (was cool hearing the parents encouraging their kids – probably first time runners).  Found out there is a dog-park the Baltimore area with your pooch – you can bring it here to socialize!  With the first loop finishing – and hitting the mile marker, I was a bit concerned this was going to be a three-loop race (I hate those.)  I crossed the 1st Mile marker at 9:06ish.  Not to bad for running it easy and having taking all that time off since Christmas.

It turns out the second loop was very different from the first loop. I turned and headed up a (long) hill that had many of the people who HAD been running – walking.  Apparently keeping the treadmill on a 2.5 incline helped, as the hill didn’t bother me.  Nice long water table at 1.5, plenty of room for everyone to get in and get a drink.  I will admit,  I was starting to wonder where they kept the two-mile mark, but it finally showed up.  I had knocked some time off, as I crossed in 17:40.  According to my handy calculator – that puts my 2nd mile at 8:34.

Finishing, the crowd was awesome – lots of cheering for everyone (I love runners) and encouragement.  Overall 5k time was somewhere between 26:16 and 26:20.  I will update this posting with my official finishing time when they post it.

I took a picture of the finish as I left.

I enjoyed the race immensely – and was surprised at how little it hurt!  I only saw 2 other people in Five Fingers.

I think I might do this one again next year!  Did any of you do a Resolution run today or yesterday? How did it go?