Seriously.   I have tried  for two years in a row to train for a marathon – and once I hit “half-marathon-ready” status, all of my running form (and other) mistakes catch up to me – and I am forced to stop. 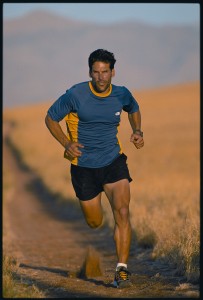 His cape must be at the dry cleaners.

And they insist they aren’t “super-men/women”

I think they are lying.  By now most people have at least heard of Christoper McDougall’s book – Born to Run about the tribe of the Taramahura.  This is an entire tribe of super-runners.  I suspect, but can’t prove, that all Ultra-Marathoners have Taramahura-Blood in them.  It’s like a form of magic – think Vampire Blood, but no sparkles.

Or maybe, like Charlie Sheen – they drink Tiger’s Blood. (Though I think the only form of ultra-marathon he can do, is one of drinking, partying and drug-use.. So that might be my flaw in this logic.

I’m not going to ask what would possess someone to want to run that far – I get that part.  The fact that you CAN, and others say you CAN’T is enough reason to try to do it.  It is the same thing that possesses people to climb Mount Everest, or Sail around the world – but no expensive gear is needed.

And then there is Dean Karnazes who ran across America.  Little known fact – his grandfather was named “Kalel.”

Of course, once I manage to finish a marathon – we will see what my opinion of these superhumans is..

15 comments on “Ultramarathoners are crazy.”