Once again it was my turn to drive the boys up to the Maryland State Boychoir practice.  I have been lucky enough to carpool with another parent – which means I only have to drive every other week!    Since I have a couple of hours to kill – it’s the perfect time to go for a run!

I thought I would try something different, and research the areas I was going to run.  I am all to aware, that in Baltimore you can be in a wonderful neighborhood, and two blocks later enter a not-so-wonderful neighborhood.   I did a quick google of crime in Herring Run Park and didn’t find any recent murders/rapes/assaults. (Hey, in a city like Baltimore, you expect SOME.)  I planned a quick run up to Lake Montebello and the Herring Run trail.  I thought a nice 3-4 miles would be in order for the night.

It was raining and misty, so I ended up overdressed as I had rain-gear on… Then it didn’t rain while I ran.

The run itself felt nice.  I kept with my recent plan, and just let my body determine the speed, although I tried to slow it down a bit for mile 2..  The initial run up to the lake from the MSB center was all through nice neighborhoods (nice enough, I probably couldn’t afford a house there) and the people nodded their heads back at me when I initiated it. <– My indicator of whether or not a neighborhood is friendly. 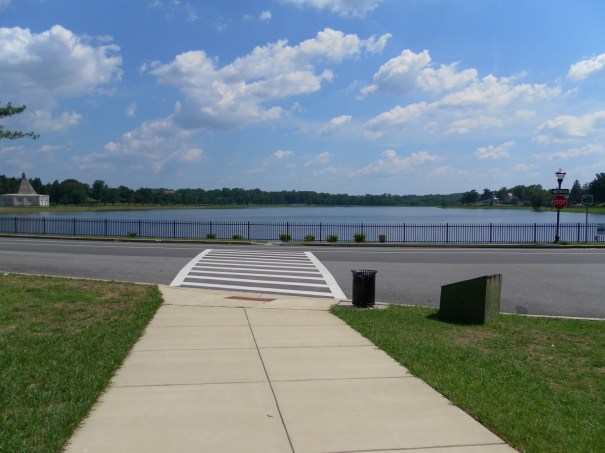 The lake itself is a bit underwhelming, with the perimeter of it coming in at around 1.7 miles.  However, when you consider it is in the middle of a city, it becomes much more whelming!  It is pretty enough, with the other walkers/bikers/joggers/runners ignoring you as one might expect in the middle of Baltimore.  From a townie perspective, it is even cooler in that they have exercise stations around the trail. 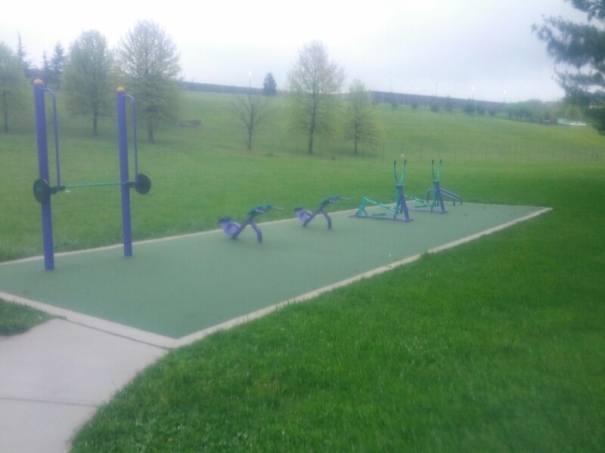 I was surprised to see more than just a pull up bar, balance beam or dip station.  Those are the exercises we had along trails in NY!  This station had an elliptical, a shoulder press station and an abs/back station.

Another advantage of running in the city – is there is a lot to see! 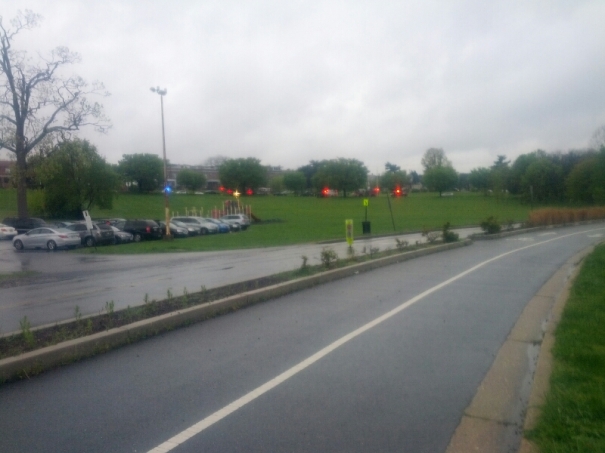 After running to & around the lake – I decided to head back through Herring Run Park.  It was pretty the last time I ran it, and I was curious if someone had picked up the fallen portapotty.  The trail through the park is nice, even with a drizzly grey look to it.

Yes, someone did pick up the portapotty.. No I did not take a picture of it.

I only encountered one other person in the park, a man out for a stroll.  I suspect the weather stopped any soccer games, runners, bikers, etc that I had seen last time..  That was just fine with me, it was very peaceful! 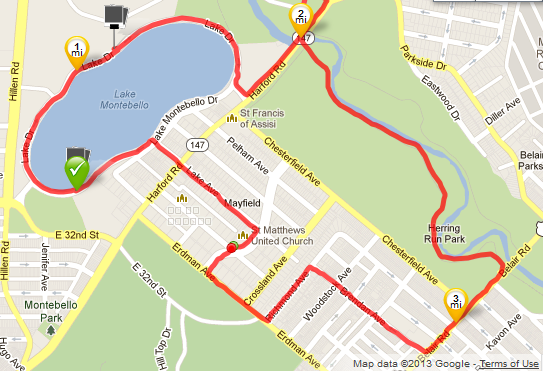 This seems like a good point in my blog posting to show the map.

After I left the park I headed back toward the direction of the church that the MSB bought.  I noticed a few good inclines, so while keeping that general heading – I began making turning choices based on where the hills were!

Around the 25 minute mark I started looking for opportunities to go UP!

Now there weren’t any ginormous hills in the path, but I felt any increase in my hill work was a good thing!

I finished strong and feeling good. The tightness I have experienced the last few runs (on the outside of my hip) was noticeably absent.  I wasn’t able to do my usual post-run stretch routine as there was no where to sit, but I did do several standing stretches.

Looking over my splits, I am still maintaining an 8:30 mile. (Mile 2 was the one where I tried to slow myself down.)   That just seems to be the speed my body likes right now and it feels good, so I will let it run there!

While I remain a little concerned about running IN Baltimore (and I still am under orders to check in with the wife when I finish), it is nice to run around different places.  I enjoyed the run!