I’m sure you have been wondering all day… What did the Once and Future Runner do yesterday, since he (probably) still can’t run, and is incompetent when it comes to basic bike repair?  Did he do another long boring walk?

Well, Wonder no more!  I am here to answer ALL your Once and Future Runner questions.. Yesterday, on the way home from work I decided I would stop and get a new tire tube for my bike.. After all, Max pointed out that a flat tire doesn’t mean you need a new bike so it seemed the logical thing to do.  I had gone to one LBS  (that means local bike shop according to Max.  She is my new unpaid consultant on all things bike related) a while back, and wasn’t all that impressed.  They were condescending, and difficult to get any real help.  Plus they seemed far more interested in up-selling, rather than helping us out.

Well, yesterday I headed out to a different one to see if that was the norm, or if they were more friendly. 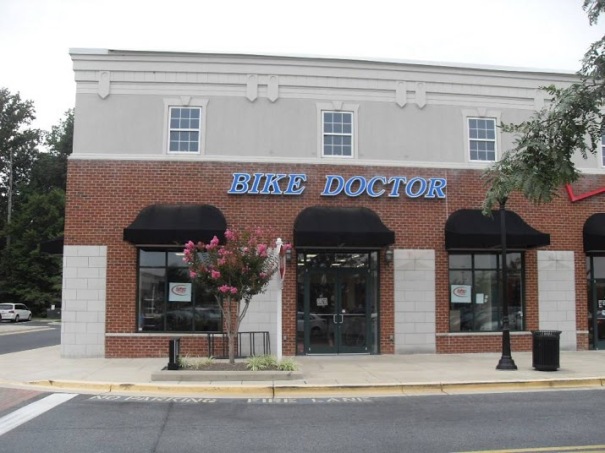 I went into the Bike Doctor, and almost immediately was welcomed by one of their employees.  He asked, not-suprisingly, if he could help me.  I figured no point in beating around the bush – I let him know I was interested in two things.  1) Learning more about Bikes, and 2) Buying a tube for my 30-year-old 10 speed.

Think about that. I said “Hey, I want to take up a bunch of your time and then only buy an $8 item.”   I certainly did not lead this guy on letting him think there was ANY sort of big-time sale here.  It would not have surprised me at all if he kept it short and sweet, answering just what he could, while getting rid of me to move on to the next person.  He didn’t do that.  Not only did he explain the basics of modern-day road bikes, but he would bring it back to my 30-year-old 10 speed as a comparison.  Nor did he mock my antique in anyway, instead explained how the chain was thinner now, allowing more gears (showing them) in the same amount of space.  HE showed me the two primary types of shifters.  Explained the different materials (Aluminum, Carbon and My ancient Steel).  He even showed me how some bikes will have carbon forks, with an aluminum body – and explained why.  He took so much time with me, Mr. $8 sale, that my wife called to see if I was ever coming home!

He even showed me an $8000 bike.. Umm.. Only my most recent cars have cost more than that… and I still have a loan on one of those!

I liked this one.

I think price-wise, out of all of them he showed me I liked the Trek 1.2T the best.  It was only $989.00.  It was LIGHT, especially compared to my bike.  It also had lots of stuff from impressive sounding companies like Shimano and Bontrager.  Also has Carbon Forks and Aluminum for the frame.. Sounds much lighter doesn’t it?  I was super impressed with the staff-member, as well as the store.  They had some sort of class going on at the same time – According to their website, a New Owners Bike Clinic – Here is a cut and paste from their website:

This is the ideal class for the new bike owner or for the person who just wants to know a little more about how their bike works. You’ll learn how to fix a flat tire, basic road side repair, and basic bike maintenance. Class space is limited to ten students per session.

New Owners Clinics will be held the first and third Tuesday’s of the month starting in April, after our Indoor Cycling Classes have ended for the season. The class is held at 6:30 PM. Please make sure to reserve your space! Call us at 410.451.6901 or send us an e-mail.

Very cool class from what I saw.

Unfortunately, I’m not currently looking to spend 1000 bucks.. So after the gentleman was nice enough to teach me about bicycles.. and the existence of certified bike-fitters, I spent my 8 bucks plus tax, and headed home to fix my antique.

First thing, the Front tire had to come off.

Then the tube and the tire had to come off of the wheel. 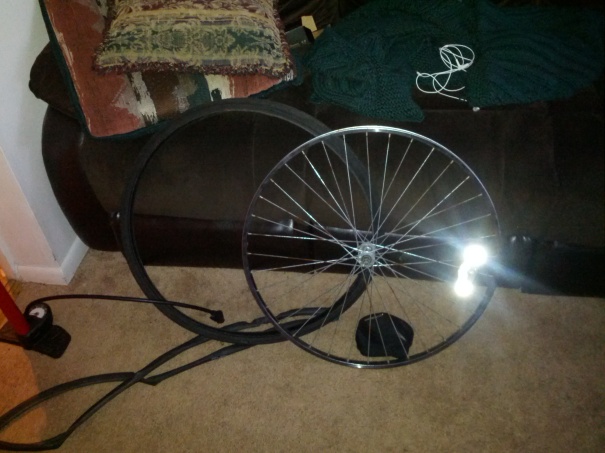 Then we had to go back to the store to get the right tube, because I told him 26 inch instead of 27 inch.. sigh.

Then everything went back together!  I pumped it up to the 90 lbs that the tire said to (weird to me that it is determined by the tire, not the tube..)  Unfortunately it was around 8 o’clock at this point so Dusk was rapidly approaching.  I still wanted to test the bike out, so my son and I headed out for a quick 2 mile ride.  The bike performed well!

Here the antique is sitting with its buddies, after a quick ride.  I think it wants to go back out!

So, that is the answer on what went on yesterday!

2 comments on “Fixing the Antique.”