Home › Cross Training › Spinning the wheels on the ‘ole antique.

Spinning the wheels on the ‘ole antique.

The logical follow-up post to yesterday’s blog is…. I went for a ride last night! 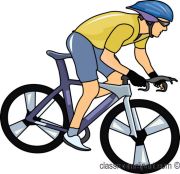 The first thing I noticed… Is my seat is very, very hard.  I think  my butt may be bruised today.  Now fortunately, the part of your but you sit on a bicycle seat with, is different from the part you sit in an office chair with, but still.. I need to figure out a remedy to THAT problem.

The second thing I noticed, is that cars are a lot closer to you..  When I run, I am safely up on a sidewalk ignoring the existence of cars.  Well, ignoring the existence except for the occasional Dodge Viper that goes by…  When bike riding, they are much, much closer.    Yet I did find that after the first mile or 3, I didn’t notice them.  Now I do have to add that when I would come upon parked cars, I would look over my shoulder to see what was coming – but I do that running as well.  I found it interesting that I was quickly

able to just be “part of the traffic.”  Now I wasn’t un-aware of what was going on, I just didn’t feel out-of-place.  I also found that stopping at red lights, the cars seemed to be pretty used to having a cyclist sitting there, and were even pretty understanding about my slow sore butt getting the bike moving when the light changed.

Now, as for the riding itself.  I started out thinking “Hey, maybe 10 or so miles..  If I can run 5 with no real problems, biking 10 should be pretty easy…”   Then I discovered something.

Biking uses entirely different muscles than running.   Well, that isn’t entirely correct.  It uses the same muscles – but it uses them differently.  My Quadriceps are generally sore all over after running and using the hard.  I found that they were primarily sore closer to the knee (not knee pain mind you, it was muscle.)  My hamstrings definitely were feeling it as well.  (Hey! What a coincidence, the neat little graphic I linked to from 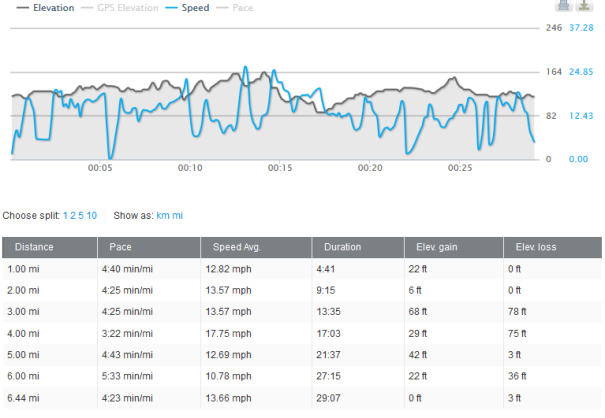 Runtastic makes a cycling app too!

I was pretty pleased with my pace for the distance.  Now, I have no idea what a decent pace IS for cycling, but I was riding at an average of 13.23 mph, with my max speed reported at 26.42 mph (obviously a down hill).  I figure that almost doubling my running speed is a good start!  Especially considering I have old-school pedals, no clips or clipless shoes.  Well, my shoes are clip-less in the sense they have no clips, but they aren’t the fancy bicycle shoes that you fasten in some magical way to your specially purchased pedals, and risk falling over every time – because you forgot how to un-fasten your shoes from your bike…

So over all, I think it was a good first ride.  It seems to be a great way to keep exercising (although the calorie burn is less than running…) and not lose my momentum, while allowing my foot to heel. (<– see what I did there?)   In fact, I might even keep cycling as a form of cross-training.  I hear it is a good type of exercise for runners.

My foot is feeling better.  In fact, while it is still sore, it felt well enough today that I forgot the arch strap.  The pain has been making that impossible!  I do have my ice pack and my foot log at work, as well as my orthotic AND my Dr. Scholls insert in my shoes.  I think I will be ok with out the arch strap today.

My limp is noticeably less as well!

6 comments on “Spinning the wheels on the ‘ole antique.”