Home › Help the Homeless › A couple of runs, and a boy returns!

A couple of runs, and a boy returns!

Another beautiful week begins!!!   I can’t speak for everyone out on the interwebs, but for me – it was a great weekend.

4 Miles on Saturday, 3 miles on sunday and my son got back from Bermuda!

I went with a simple out and back course, so I didn’t have to worry about dodging cars on roads with no side walks.  (My four mile loop has a mile with no sidewalks and very little shoulder!) 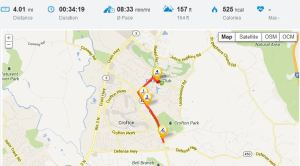 I saw plenty of runners.. I guess I am becoming a “Regular” now.  When I first started running here, I noticed the runners weren’t near as friendly as they were in upstate NY.  Now, they have accepted me as one of their own (Grudgingly or not..) and nod, wave or even (gasp!) say Hi!  I admit it.. I like it. 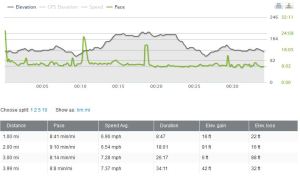 Sigh.. Sometimes my body doesn’t listen to the speed I want to run…

On to Sunday….. The  day my boy comes home!!  Now, looking forward to having my son back from his 9 day journey, is not enough of a reason to skip working out.  The day was BEAUTIFUL.. So I thought a bike ride would be PERFECT!

About that… I sat on the bike, turned on my bike program.. .and heard a POP… There goes the front tire.. again.

So, while running two days in a row isn’t currently in my plan – it looked like it was the new plan.

Another out and back, though I headed North instead of South.  More friendly runners out and about..

A Nice slow start was a necessity.  My Plantar Fasciitis was not ecstatic with the idea of two days in a row of running.  Now granted, It hurt far less than I thought I would after yesterday’s run, but still.  I had the KT Tape on my foot

And I was hoping it would help like it did the last time.  After the first mile I loosened up a bit, and picked the speed up to around 8:40.  This is a hair faster than I hope to run my marathon in.

The run itself went AWESOME, I really enjoyed it.  In fact, I think these two runs were some of the best ones I had in ages!

We went up to Baltimore to pick my son up. The Maryland State Boyc

hoir just returned from their cruise to Bermuda! (Do my wife and I get the “coolest parents” award or what?  We sent our 10-year-old son to Bermuda without us!)

The Choir did a fantastic job in their welcome-home.  We had a giant potluck, so we could see our son.  The began with singing the grace they did for the cruise ship, and we dug in.

THEN the boys all ran off – as it was time to prepare for the welcome-home concert.

That’s right.. They left the cruise ship at 6 am.. Went  to a church and performed at 10.. Then drove from NY city to Baltimore MD, and had to perform AGAIN!!!

And they were fantastic!  They were so tired from the cruise/tour/concert schedule that I was amazed he didn’t fall asleep on the way home!

A great weekend, that is for sure!

Please consider donating to my Help the Homeless fundraiser for Volunteers of America Chesapeake’s homeless services.

The fundraiser is through the Fannie Mae – “Help the Homeless” walk program, which means they match every dollar you donate, with a dollar. So even a $5.00 donation immediately doubles in size!

If you want to read more about the good works of Volunteers of America Chesapeake, you can check out their blog!

Please show that you too are “Called to Care”, by donating