Home › running › When both kids want to run… The other kid.

When both kids want to run… The other kid.

So my son has long wanted to be a runner.. He has been very successful at it thus far. Monday, Wednesday and Friday (along with a long-ish run on the weekend) are his days to run with Dad.  Until this week, we had not been doing well on getting two runs done during the week.  THAT CHANGED TODAY!!!!  We headed out for our 3.1 mile route, and while it was a wee bit cooler – it was still humid. 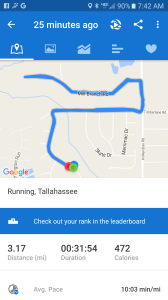 There aren’t sidewalks here, and I know my son misses them as much as I do.  We do pretty well on staying off of main roads – but anything over 1.5 miles is either going to be very repetitive, or require part of our trip to be on “Meridian” – a fairly busy road.

We haven’t died yet, so I figure we are doing something right.

Today was a “I really didn’t want to get out of bed” morning for the Boy. Its really the  only part of running he seems to strongly dislike – that it takes time away from other things, like sleep and time with his friends.  He doesn’t whine about it though, so its ok.

He only had to walk three times today – we are definitely making progress!    I have no illusions that it won’t be much longer until he is kicking my butt.