Home › Hill Running › Maps are awful flat.. The running route was not!

Maps are awful flat.. The running route was not!

My trusty water bottle, you can see on the back side where the fabric was that I could keep under my hand - while the strap was on top of it. It bounced a bit more than I may have wanted, but did work.

A nice short run of ten miles was in the cards for yesterday so I used mapmyrun.com and figured out a route that was 10 miles that would end at my parent’s house. ( Yes, even in my mid thirties I am mooching off my parents, although for this day it was simply some water and a ride home!)  I filled up my water bottle and headed out the door.  The last time I ran with my water bottle, the water quite warm shortly into the run.  I thought cool water might be nice while running, so this time around I decided to toss some ice-cubes (Brilliant aren’t I?)  Shortly after starting – I had  another brilliant realization – holding a bottle of ice water in your bare hand makes for a cold hand! (Man, I could so be a rocket scientist with cognitive abilities like these!)  I thought of  “I Run Like a Girl’s” recent frost-bite experience, so I switched how I was holding the bottle.  I changed it so that the fabric of the bottle was between my hand and the bottle – It wasn’t terribly comfortable, but it did avoid frost bite in July.

My big learning moment last week was learning to map a simple route so that I could remember all my turns – this WAS successful, I remembered every turn!  Another difference from last week, there were no bridge jumpers, or protestors on this run, but I did see several groups out enjoying the beautiful weather.

Kids doing a reading in the local park - Great way to spend a gorgeous Saturday!

This was cool to see – there was a pretty good size crowd sitting in the Southside Park in Johnson City, watching (listening to?) the kids.  There is a funny story associated with this.  The first picture I took included a gentleman in the bottom right corner.  After I

snapped it, he started asking why I took his picture and if I was going to post it on the internet.  I assured him I was going to use the second picture – the one without him.  But because I have a great sense of humor – here is the picture – with him blacked out:

Further along I saw a  church group celebrating outside.  It was perfect weather for it and they had a live band performing.  To be completely frank though, it sounded horrible, with the church bells were going off at the exact same time (announcing the six o’clock hour) as the band performing (I’m sure they sounded good without the bells though.)  They were not harmonious (or even in tune with each other to be honest.)  However, It was fantastic to see people in an outdoor celebration!

So some of these outside pictures may seem pointless - but I LOVE to see people taking advantage of the nice weather!

Unfortunately, after taking this picture my phone rebooted.  The frustrating part of using the same piece of equipment to track my runs and to take pictures. I lost 3 miles on my Cardiotrainer run-tracking.  (This gave me a great opportunity to listen to the joint cacophony of live music and church bells.)  After taking its sweet time, the phone came back up and I started Cardiotrainer again and continued on.

The run felt pretty good (my achilles loosened up around mile 2), and had maintained a running speed of 6.5 – 7 mph. It wasn’t steller as far as speed was concerned, but since it was my long run – I was pleased.  At 6.83 miles (I love mapmyrun.com  how else could I give “exact” measurements?) I had a sudden realization.

When planning my run – I use mamyrun.com as it is fantastic for measuring distances, but a sudden weakness of this technique occurred to me.  It doesn’t show elevation. 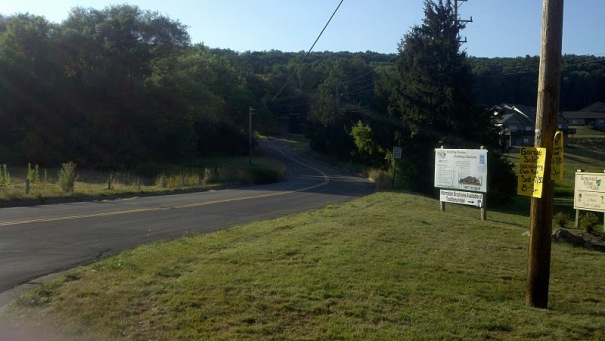 See where the road goes up and out of sight behind the trees? That is where the real hill begins. For locals, its Country Club Road.

My thighs/butt definitely let me know that I was starting up some steep hills. I had been concerned about traffic up this road, but the drivers were very considerate!  I managed the up and down, and hit mile marker 9.3, the turn up to my parent’s road.

Oh crap.  I had not thought about this.  When people ask me where my parents live – I tell them “On the Hill in Endicott.”  Umm.. This means – THEY LIVE ON A FREAKING HILL!!!!!  How did the fact that I was going to end my longest run this calendar year on a 3/4 of a mile steep hill escape my notice? 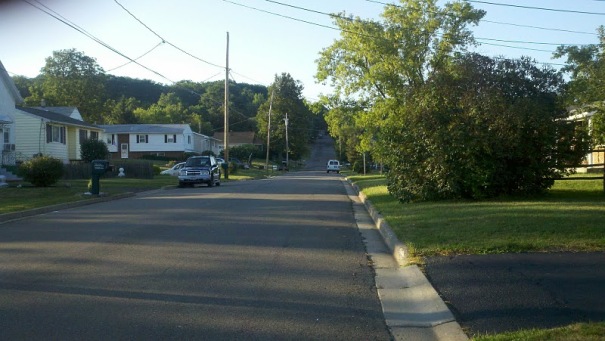 Second part of the hill. See the long winding hill up? My folks are at the TOP!

On general principle, I was NOT going to walk up the final part of my run.  After sending my father, brother and wife each a text message saying “THIS HILL SUCKS” – I finished the Run.

Thanks to Mom and Dad for the water and ride home at the end!

I figure my blogging friend “The Curvy Road Runner” will appreciate the irony of my suffering through hills after my comments on her latest post!

One comment on “Maps are awful flat.. The running route was not!”