Home › running › Pose vs Chi running – or -When illness strikes the family, the foot does not strike the pavement, so lets do some research instead.

Pose vs Chi running – or -When illness strikes the family, the foot does not strike the pavement, so lets do some research instead.

unfortunately on Tuesday, my daughter’s latest meal decided not to stay down and it continued on for about 24 hours.  What this means, is my feet did not go out and strike the pavement.  Even after my wife got home – I was simply too tired from getting up every 45 minutes or so with my daughter.

But, even though I didn’t exercise – I wasn’t wasting my time!  I decided to continue my previous thoughts (and advice I have given others) and have been looking into CHi Running, POSE and Evolution running.  These three have some very similar ideas, such as leaning forward (from the ankle), Falling forward into your next step, standing upright, don’t hit with your heel, and  short rapid strides (though how to run FASTER from this – varies between them.)

Now the interesting part of what I found in the research – is that they all want to claim they are COMPLETELY DIFFERENT than the others. The followers of Chi Running seem to insist that theirs is different in every way (and implied better) than POSE, who say the same.  Evolution running is just beginning – so it’s not really involved in that yet.

From what I see – here are some of the primary differences.  In POSE running, you bring your foot up after stepping, and forward into “the pose.”  In Chi-Running you seem to primarily lift your leg behind you – rather than up in front.  POSE seems to like a fore foot strike, and CHI likes a midfoot (although all the videos on youtube seem to show a forefoot.)  CHI running uses eastern philosophy terms, while POSE tries to stick with a more scientific explanation.  POSE has drills for each level, while CHI doesn’t seem to have that.  CHI has much more variation in its “ideal,”  While POSE seems pretty much – do it their way.

In Dr. Romanov’s book – he explains that the “one true best form for running” is going from “the pose” to “The pose” in the most efficient and economical way possible.  If you look at the cover of his book to the left, you can see what the Pose is.  It seems the idea is to get into this pose, fall forward into a step and return to this pose.  To go faster, you speed up your cadence.

I have started reading the book, and it seems to have a series of drills to teach you how to get to the exact “ideal” running form.  They also offer input in the forums on the website, with people uploading videos (shot from a specific angle to make it easier on the coaches) to give you more advise on how to improve and get it right.

There are also workshops throughout the nation held by Dr. Romanov and by his certified coaches/teachers.  unfortunately, none of these coaches or workshops are anywhere near me. so I would be restricted to books/videos for this form.  Luckily the book/video come in one combined pack at “One Low Price!!!” 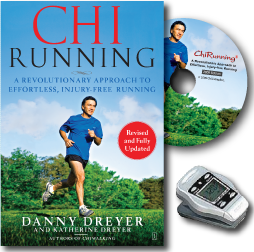 CHIRunning also was designed to lower injury, improve performance, etc.  CHI teaches that anything below the knee should be relaxed and un-used.  The theory is that the small muscles (calf muscles, shins) are what you see injured in most runners.  Your Core Strength is stressed in its importance.  In CHI Running, if you want to speed up – you stretch out your stride, always keeping a steady cadence of ~180 steps per minute, regardless of speed.  This program is available for the same ONE LOW PRICE as the POSE kit, but also includes a metronome. (The metronome is suggested in both styles to help you hit the 180 steps per minute that they both recommend)

I have read about half of each of the books – Danny Dreyer’s CHI Running, and Rominov’s POSE.  I probably would have liked the eastern-philosphy aspect of CHI running much better when I was younger, but now it was somewhat annoying to me.  I have decided to continue reading the POSE book, and watch the DVD.  I like the idea of set drills and exercises to get me to the stage I want to be at – as well as the availability (via video) of coaches on-line.

I see many, many similarities in these two, and can see where one might be preferable to the other – for different people. My suggestion? Try one – and if you don’t like it try the other!  After all, who doesn’t want to run injury free and faster?

2 comments on “Pose vs Chi running – or -When illness strikes the family, the foot does not strike the pavement, so lets do some research instead.”