Running the Hills with Dr. Denton

Just recently I picked my kids up from school (they still won’t let them stay overnight) and headed home.  Now, this may be a common occurence I admit, but there were some differences compared to usual.  My cross country coach from High School had his team doing laps on a hill between my house, and my kid’s school.  After a brief exchange yelled through my open sun roof, I headed home.  Combine this interaction with the agony that was the final hills in the Chenango Forks XV, and even my thick-skulled self realized I should do some more hill workouts.

The benefits of hill running are many, with the first and foremost being that you will be able to run hills better.  It works your upper leg muscles, your gluteous maximus and work the same muscles that sprinting does.  In other words, it can give you a nice booty and make you faster.

Given that seeing my old cross country coach and his team inspired this rising thought, its only logical that I headed to a hill my Cross Country team used to run on!  No, not the nice sloping Laurel Ave hill he had his team doing loop after loop on – but Denton Rd over on the south side of Binghamton.  Now, back in the day – when my age was less than half what it is now – We used to sprint from the bottom to the top.  I thought that might be a bit much for me now, so I just ran from the bottom to the top.  Mind you for this paragraph we are defining “ran” as “any sort of motion that moves the body up the hill, whether it be slow or fast, and has a similar appearance to what people call “running” regardless of its speed.” 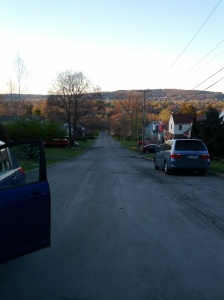 I really prefer seeing it from this top-down angle.. Maybe that is why Brian (the coach) always stood up here yelling at us.

What makes Denton so pleasant, is that it has a 350′ rise in elevation in a measly 1000 feet.  I headed up it, back down, back up and around the block (it occurred to me up and down was boring) and back up.. Followed by an additional around the block and back up, for a total of 4 times up.  I will admit that it doesn’t necessarily seem like a whole lot, but I thought it was a good start to doing Hills again.  It may be time to add my run from home to Eli Park Golf Course again. It’s a seven mile round-trip, with 650 feet in elevation gain in 1 mile.  I think that as my knee is a bit sore from yesterday’s workout – that Eli will wait until this weekend at the earliest!

I always liked running hills, maybe its time to own that feeling again!