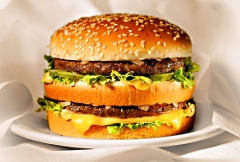 So, I started thinking about what I was eating a while back and how I could improve it.  The first obvious step – is eat fewer calories than I am burning.  Myfitnesspal works well on helping me with that.  Not only that, its method of using basic math to lead to weight loss – definitely works!

Now, that I have “burn less than you eat”understood – I am attempting to move into the “make better choices” stage – Some of which I have already begun.  It’s obvious that broccoli is a better snacking choice than cookies.   But there is obviously more to it than that.

Let me speak up here and say that I am not becoming a vegetarian.  I did it for quite a while at one point in my life – and have no real plans on going back to it.  I like Bacon Cheeseburgers, and a tofu-burger with genuine tofu-bacon on it does not come close.

Recently, I have read a lot about how your relationship of carbs to protein matters.  But I’m not finding much in the way of good information of examples of properly weighted meals.  I admit it – I want someone to SHOW me healthy meals. I’m a visual person, I learn that way. (Oh, and I’m somewhat lazy – so if I can copy someone’s meal plan for a week or two to get an idea – that’s really a great bonus.) 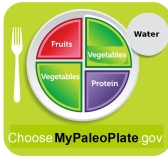 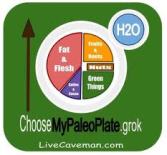 I’ve read about the Paleo Diets, and they make sense to me. Less processing = more goodness.  But with two kids, a 40 minute commute, 50 hour work week and trying to find time to run – lets face it, I don’t have an immense amount of prep time.  I don’t have any problems with the idea of spending a few hours on the weekend doing prep-work for the weeks meals, but it doesn’t seem like that would be enough for a real Paleo diet.

I’m also starting to research what a runner-in-training-that-doesn’t-want-to-be-fat anymore should have in their diet… Of course, we are also back to not having pictures available.. (I promise, If I figure this out, I will do a series of blog postings with pictures on proper eating.)

Now realistically, I of course don’t expect someone to give me, or to find – a weekly diet plan with recipes and pictures (Though it would be nice… Any nutritionists out there feeling bored and open to charity work?  Free publicity on my blog!)  But It is amazing how much mis-information is out there.  As food companies are more interested in getting your money, than preserving your health (Yay Capitalism!)  Don’t get me wrong – I don’t fault them their profits – it just makes good information hard to come by.  You can’t even trust labeling anymore (GMO/Organic for example) 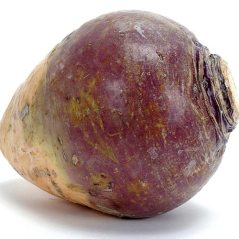 So what on earth do you do with THIS thing?

My wife and I are both researching – and slowly making changes.  Some are as simple as switching to “Organic” milk for less processing, others are the obvious cutting waaaaaaay back on red meat.   There are an immense amount of vegetables out there I have never eaten, that I might like. Like a Rutabaga. My only experience with this  – is when my brother won the annual “Rutabaga Curl” at the farmer’s market in Ithaca NY. (As the defending champion he was even interviewed on the Radio!)  Not really the best intro to a vegetable! (My wife assures me they are disgusting)

So anyone out there have any suggestions of vegatables I should try? Maybe some recipes or a favorite meal?  Or even an entire meal plan for a month/week/year?

3 comments on “Better Diet. (Not Dieting)”