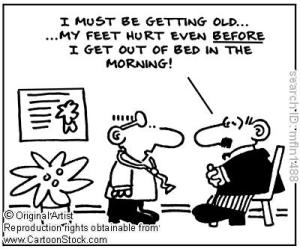 Who knew there were so many foot pain comics out there?

So, at the end of Part 3, I had a plan on how to deal with the Plantar Fasciitis which was:

While my desire for an insta-fix was (expectedly) dashed to the ground, having a goal and a direction that would resolve my issues was fantastic.  The podiatrist had warned me that this might be a long process, and lets be blunt here.  Considering the lack of flexibility when he tested my ankle?  This (unfortunately) made an incredible amount of sense.

So, a couple of things I did right off. I knew my Orthotics weren’t going to be ready for approximately 4 weeks – so I went out and got some blue ones from Dr. Scholls.  This combined with the Arch strap did give some immediate relief.  I was cleared to try running fairly quickly after my Doctor’s visit – but my shoes hadn’t arrived and I wasn’t willing to attempt to run in the shoes that had contributed to my problem.  Not wanting to lose my fitness level – I attempted other workouts (Insanity), but I have to admit I only lasted a week or so at it.  I have an unfortunate problem when it comes to exercise.

The problem is, I’m a runner.  I like to run.  I can put up with other exercises – if it helps me run better, but if I’m not able to run it probably won’t last too long.  I know it’s a will power thing and something I hope to never have to face again.  If so, maybe this time I will beat it.  But that’s a whole other story.

The Insanity lasted about a week, then it all got side lined when my Mother In Law had heart surgery.  I ended up with two weeks off of running and exercising, and my Plantar Fascia didn’t improve much. I even tried KT tape instead of my old taping method (not as useful as I had hoped.  It actually hurt worse afterwords, though I’m not blaming it. I suspect that there was something else, and the KT tape simply didn’t have the same level  of support as the other taping method.)  I wore the Nightbrace, used the stick and footlog and iced.

Periodically, I would try running again, try to convince myself it wasn’t really hurting – then when the truth set in, I would cut back on running and mix in some other exercise as well. Overall, the pain was staying with noticeable pain but at levels that I was able to function at – even if it did hinder my desire to run..   Honestly, I was terrified that I would run for more than a day or two and bring back that absolutely excruciating level of pain I had been at.  It kept me from really trying to start running again for real.

Through out this time (probably up through end of June), I was continuing to stretch my calf using the stair stretch, take Ibuprofen and ice it.  But I wasn’t doing much exercise.  Then I went for a Job interview in Maryland.  In July, they called and offered me a job.

Ok, at this point any form of exercise went away as we began to prepare our house to sell, and very quickly (as of August 1st,) I was spending Sunday night to  Friday morning living in a hotel.  This had a definite advantage of easy access to a treadmill – so I began doing 2 mile increments on the treadmill, once or twice a day.  I had hopes that I could still pull off running the Marine Corps Marathon in October (mind you this was August 1st, and I had done no real running since the end of March.)  Needless to say – if my family was going to move down ASAP, my focus needed to be on finding a place to live.  With that accomplished, my family moved down Sept 15, 2012.

Through out this I continued to stretch my PF, and it maintained a fairly steady level of throbbing.  No sharp pains, just dull and constant.  I was un-able to run the Marine Corps Marathon (and had no business considering it anyway), but I did start my running back up.  Other than 3 weeks since Sept 14th, I have run every week.

So where am I now?  My Plantar Fasciitis still aches, but I haven’t had “Sharp” pain in a long time.  I still pay attention to whether it lowers or gains.  I wear shoes with orthotics all day throughout the week and until very recently – have done all of my running with orthotics in my running shoes. I just recently tried short runs in the VFFs, and wearing them walking around on the weekends (at first with my Dr. Scholls inserts, now I am trying without.)  I have been varying my footwear as much as possible, as I try different things to see what makes my feet ache more, and what makes them ache less.  Without a doubt, the biggest contributor to it now – is the shoes I wear every day at work.  They are a marvelous-looking pair of Docker dress loafers, that look fantastic whether I wear a suit, or just a tie and sports coat.  Unfortunately, I have been unable to find any dress shoes that do NOT make my Plantar Fascia relatively unhappy.  I’m currently watching what is happening with the “Primal Professional” – a barefoot dress shoe.  Even if I put my orthotics in them, they will be a relatively low-rise and more spacious shoe, which should cause me far less discomfort.  These have the largest advantage of looking like a conventional dress shoe WITH a heel – even though the heel is actually fake.  There are however two major down points. The first one – they aren’t available yet.  The second?  They are $350 a pair.  I am also considering the Vivobarefoot Ra – but I don’t think it looks dressy enough.

On the weekend lately, I have a tendency to wear my VFFs.  While many people report that walking barefoot hurts their PF, I actually find that mine does feel better.  When I walk in the door from home, I kick of my shoes immediately – and walk across the carpeting.  My feet thank me.  Now after a full day of walking around in my VFFs (if we go to the National Aquarium, or a Smithsonian), my feet are sore at the end.  Regardless of what I wear, I am usually aware of the tightness in my feet, and as such I continue to do Yoga after I run, or on those rare occasions I don’t – a full stretching of the foot/calves/hamstrings.  At this point I think that is the ultimate solution for me. Get more comfortable shoes, and get so I can bend over and touch my little piggies at the end of my feet.  (oh, and avoid aggravating my Plantar Fascia as much as possible. I think that is also a big part of it!)

My wife and I have totally changed our diet as well – with a large increase in vegetables.  I mention this, as I have been doing a wee bit of reading on how a crappy diet can interfere with your body’s ability to heal itself. (Living in a hotel for 6 weeks, you don’t think I was eating well do you?)  Some of the better meals will be posted here!  Once I have 3 or so, I may even add a “healthy recipes” tab at the top of the blog next to Product Reviews.

In addition, since many injuries are caused by bad-form, I have been in contact with Tracy Peal up in Pennsylvania, who is a Level 3 Certified POSE instructor.  Since I have thus-far been unable to find a clinic I can attend, I am hoping to schedule a session with him and improve HOW I run so that I can run better, and stop getting hurt!

I think I am on a fair path toward not only fixing this issue, but trying to prevent my “injury of the year” trend.  This year, I WILL be running the Marine Corps Marathon.

3 comments on “The Plantar Fasciitis Trials – Part 4 – the excuses.”