Running with old friends and new

The summer has been on-again, off again as far as running is concerned. As soon as I get a couple of weeks under my belt, a family or work emergency crops up that prevents it for a couple of weeks.

No complaints here, as I have been able to take care of things – so it’s all good!  I’ve just avoided posting until I felt like it was going to remain on-again, as how many “restart” posts can I do in 2 months? It just gets silly.  So, since I am claiming to be on-again full-time, lets take a look at the routine. 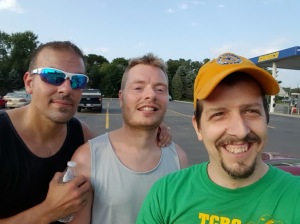 I am currently running at least twice a week – meeting up with some other folks in Crofton at 5 am to run 5 miles.  I then go home on those same Tuesdays and Thursdays and run with my kiddos for a walk/run combo – for 2 miles.  There may be a 3 (or 5) mile run on Weds or Friday, depending on other’s schedules.  Then a long run on the weekend.

This last weekend was a 10 mile run up in the “Greater Binghamton Area” – with Derek and Jeremy.  It was hot,muggy and we all foolishly didn’t bring water.   Derek Whined a lot, but despite hurting his back the night before,running too many days in a row and being hungry – ran the furthest he ever has!  His first 10 miles- DONE!

Now he can come run the Cherry Blossom 10 miler in DC with me!

I’ve put a wee-bit too much mileage in right off (26 miles last week) and my right knee, and my plantar fasciitis aren’t to happy with me.  I think they will adjust (with the help of stretching,foam rolling and lots of Advil!)

So… I’m back. Some product reviews soon!  Now to pick some races!

Join 374 other followers
Once and Future Runner on Face Book!