I find it difficult to believe that there are many runners out there that wouldn’t like to run “injury free.”. I especially think that any runner who pulled their calf muscle five times last year AND got shin splints that hurt enough that even the doctor thought it was a stress fracture REALLY needed to attend a seminar called “Injury Free Running,” by Mathew Nark of Plaza Fitness in Stuyvesant Plaza, Albany NY.   The evening of the St. Patrick’s 4 mile run I had the opportunity to go to just such a seminar that the Triple Cities Runner’s Club sponsored.  I was bound and determined to walk out of there with at least three big things I could change, and I was not disappointed.

Probably the most fascinating piece of information I got out of it was the idea of muscle activation.   Mathew stated something along the lines of (I don’t have an photographic memory) “About half of the people I see come in for injuries – aren’t injured.  They have muscles that simply aren’t firing properly.  Think of an army with 100,000 people. If only 20,000 are working – then it isn’t going to be doing its job well.  This is also true with Muscles – if only 20,000 of 100,000 muscle fibers are working – the muscle isn’t going to work as well.”  Muscle activation is the idea of increasing the number of “working” or activated muscles fibers.  Even if you only get it up to 60,000/100,000 fibers – you are going to be able to do MUCH more than if you were at 20,000/100,000.  He then demonstrated with someone who had a recurring IT Band problem (and stressed that this is not guaranteed to be someone’s issue just because they have IT Band pain, but that it WAS worth looking into if you did) come up as a “volunteer.”  With this person, he performed a few exercises designed to “Activate” the adductor muscles on the inside of this woman’s thigh.  When he first started, he was able to stop her from pulling her knee in – when it was flat on the ground (with her on her back with the leg bent) with just one finger.  But doing a few exercises against his resistance, he “woke up” the adductor.  She confirmed that her IT Band felt a bit better.

The idea was that muscle pain – such as an IT band issue – can be caused by a muscle asymmetry.  In this example, her IT band and her Adductors (or the outside of the leg vs the inside of the leg) were not working properly together.  Her Adductors were “slacking off” (my words, not his,) which was messing up the way the IT band is able to do its job.  Other examples could be pain caused by an imbalance between chest/back, calf/shin, etc — basically opposite muscle groupings (yes, I know the IT band is a tendon.)  It could also be one side of hte glutes vs the other.  One hamstring vs the other.  He also told us about the “Functional Movement System” – which was an evaluation technique that he recommended to see what asymetrys one might have. (Mind you, he was from 3 hours away – so he wasn’t fishing for business.)

Mathew also discussed general practices that could help to prevent injury.
1) Breathing. – Obviously an important part of running. If you doubt it, try doing so with

out breathing some time!  But in seriousness, he was referring to diaphram breathing vs chest breathing.  I suspect we have ALL heard about how we need to breath from our diaphram at one point or another. I have heard chorus teachers, band teachers, running coaches and more say it.   Mathew raised on really great point.  Why not do it all the time?  If you concentrate on it – within a few weeks it will be complete reflex at all time.

2) Stretching –  In regards to Static STretching – Stop it.  Unless a physical therapist is using it for a specfic rehab, stop it.  Muscle activation, and dynamic stretching do a much better job.  He also tossed in the idea that if you have a muscle group that is very flexible, then perhaps you shouldn’t be working much on stretching it. Hyper-flexibility apparently, can cause as many problems as not being flexible enough.  Especially if it causes asymetry. 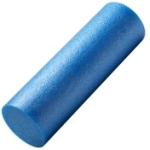 Soft Tissue Preparation – I have spoken in the past of my love of “the stick.”  I have

used (though I don’t love it as much as my stick) my foam roller – and listened to others praise it.  Mathew’s suggestion is to make this as valuable as your tooth brush.  Use it every day when you get up – before you  go to work.  Use it before a run (obviously as close to the beginning of the run as possible.)  He suggested the foam roller, then the stick.

4) Core training – Obviously this is a good thing.  The HOW of the core training is something that has been done in a less-than-ideal method in the last 30 years (my random time period, not his.)  We of course know about the move from situps to crunches – but the overall view now is to avoid any repetitive motion with your spine as it can contribute to herniation of the disks.  (that’s bad)  The idea is to strengthen the ab muscles using the same idea of why we have them.  We primarily use them to RESIST movement, not to cause movement.  This is the idea of

everyone’s favorite – the plank. Our core muscles hold us steady and don’t let us fall.   So – no repetitive motion, but methods that force our core to hold us steady.  He showed us several exercises that Dr. Stuart McGill – the leading Spine Biomechanics expert – recommends. He is well worth googling.  His recommended exercises are available on youtube.

One comment on “Injury free Running seminar at Binghamton University”