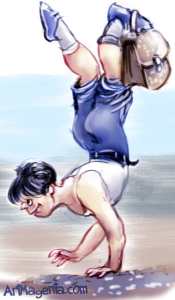 So, last night I headed out into the 30 degrees (F) for a run (No Jeremy, I wasn’t in shorts.)  I decided to be different and do the run on my hands, to help build upper body…

Then I remembered that I can’t stand on my hands, and that running on them was right out.  That lead me to lean toward running on my feet instead.   This was probably a great choice on my part for so many reasons – most of which you have already thought of, so I won’t go into it!

Ok, so all humor aside, yesterday ran later than normal, just the day-to-day.  The entire reason – was I hadn’t gotten the items needed for my Whole30 meal, and had to stop at the store on the way home.  Granted the Bacon/Roast Beef/Lettuce Club Wraps – were AMAZING!!!!  (Whole Foods carries Bacon with no sugar or preservatives – Whole30 compliant!!!)  I was well fueled (aka, ate too much) for my run – with the wraps, as well as the addition of fresh pineapple.  So I was all set! 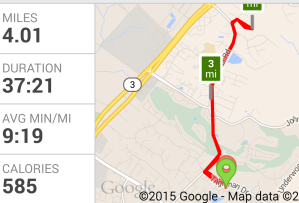 I decided to go with the same direction I went yesterday, with a little longer of a trip to make it to four miles.  Stopping at 3.78 last night, did annoy my slight OCD tendency.  With the full belly, and being the second day in a row (as well as it being dark and a bit icy), my pace slowed down.  I would have added more excuses there, but I couldn’t come up with any.  Overall, the run wasn’t to bad.  I am never super in to it when I am running at 8 at night, but it was ok.  By the last mile, I was ready to be home.  I spent the run listening to an Audiobook, and found it did help.  I’ll be curious to see how effective it is when I don’t have to look for ice in the dark!  Hard to get in the “zone” in that circumstance. 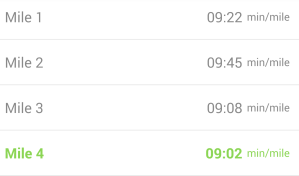 The Second mile was really where I was struggling, but everything soothed out for the last two miles.  I do really think that if I had been running in a condition that I didn’t have to be quite so alert in watching for broken side walks, ice, etc – that I would have been “in the zone.”

Overall, a nice time out!